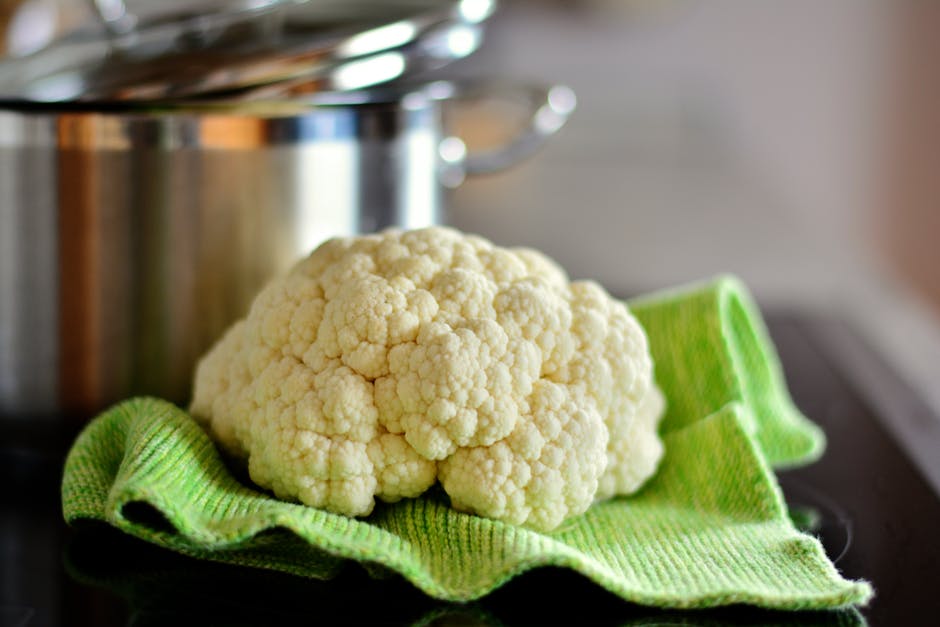 Cauliflower is a member of the mustard family & is harvested whole in Autumn. It’s a versatile vegetable containing a good source of dietary fibre & can be cooked in many ways.

It became a popular substitute for rice as low carb diets became more fashionable. Cauliflower is low in calories but rich in nutritional benefits.

Key nutrients of Cauliflower are:

Research shows that vitamin C protects against free radicals due to its antioxidant nature. It also helps neutralize the effects of nitrites (a group of commonly used preservatives), which many people come into contact with daily through processed foods.

For fertility health vitamin C is important in the process of absorption, and for its ability to support the luteal phase of the menstrual cycle.

Supplement forms of vitamin C are usually inferior compared to natural sources and my advice is to obtain this nutrient from your diet daily through fresh vegetables and fruit.

Vitamin C increases the absorption of iron and affects the way calcium is metabolised and stored in your body.

Vitamin K: Vitamin K is an essential nutrient (made of two forms: Vitamin K1 and K2) necessary for responding to injuries, as it regulates normal blood clotting.

By assisting the transportation of calcium throughout the body, Vitamin K may also be helpful for bone health. It may reduce bone loss and decrease the risk of bone fractures and it may also help to prevent calcification of arteries and other soft tissue.

Vitamin K can be particularly useful if you suffer from heavy and/or painful periods as it can help slow down the blood flow and reduce cramping.

Vitamin B9: Also known as Folate or folacin. Mistakenly many people take Folic Acid, which is a synthetic version of Folate that is not recommended due to possible toxicity.

Folate is essential for human growth and development as it encourages normal nerve and brain function. It’s involved in the creation of DNA as well as building of proteins, and many other important functions including the healthy development of your baby’s spinal cord.

Folate has long been known for its protection against spina bifida, but many people don’t realise that it’s also important for their day-to-day health.

During pregnancy folate also supports the growth of the placenta and helps to prevent several types of birth defects, especially those of the brain and spine. Folate is an important nutrient for general and fertility health.

Vitamin B5: Also known as Pantothenic acid is a water-soluble vitamin found in most foods, so deficiency is rare. It is needed for the metabolism of proteins, carbohydrates, and fats and is used in the production of coenzyme A.

Coenzyme A is an enzyme that’s involved in a variety of processes in the body – particularly the breaking down of fatty acids and transforming cholesterol into various hormones, and so is vital for maintaining fertility health.

The human body can only absorb around 10mg of vitamin B5 in a day. Any excess B5 which is not absorbed is then eliminated from the body.

B6 also helps in the production of neurotransmitters, which are the chemicals that allow brain and nerve cells to communicate – and this ensures that metabolic processes such as fat and protein metabolism happen properly.

B6 is also a strong component of the immune system, which makes it vital to have in your diet whilst trying to conceive.

It can also help address a number of conditions, including nerve compression injuries (like carpal tunnel syndrome), premenstrual syndrome (PMS), and some cases of depression and arthritis. Vitamin B6 is often used to treat high homocysteine levels along with folate and Vitamin B12.

When Qi becomes more severely deficient you will likely present with hormone imbalance, typically with reduced Progesterone, Testosterone and/or FSH levels. In some cases, the FSH can rise and present itself as being elevated, due to the ovaries or testes being underactive and sluggish (tired).

Yin Deficiency is a pattern of imbalance in Chinese Fertility Medicine that describes depleted fluid levels of the body.

This is not dehydration as such, but a deep and longer-term type of fluid deficiency or dryness of the tissues and cells.

Reduced fluid levels in the body interfere with temperature regulation, blood and fluid circulation, and delivery of nutrients and vital substances to your cells (including egg and sperm cells), tissues, and organs.

Extra notes: Cauliflower is considered to have a mild action, which makes it good as a food that you can safely eat on a regular basis. It helps ease symptoms of dryness such as having a lack of cervical mucus around ovulation or experiencing constipation with dry stools. Cauliflower also strengthens digestion when used over a long period of time. Combine with bell peppers and celery to optimise the digestive effect.

How it’s typically cooked: Boiled, roasted and more recently used as an alternative to rice.